The other day I got sassed by a Walmart employee wearing a name tag, and I immediately thought two things:
1)      What is this, Miami all over again?
2)      I am going to name a character after you, and he’s going to be stupid and have body odor issues.  And you will never know it because you probably don’t even know how to read, you cranky jerk you, but I’ll know it, and I’ll smile every time I think about the fact that I’ve slandered your name in my own petty and permanent way.
So after thinking for a while about how awesome that was going to be, I started imagining how I could expand that concept to punish everyone who has ever annoyed me.  Like that kid in junior high who teased me for being a goody-goody and then ended up in juvie for stealing a car in eleventh grade—I’m changing one of the names in my WIP to his name.  Yeah!  How ya like them apples, Paul?
Just to clarify, I’m not obsessed with revenge across the board, I just really enjoy naming characters.  It’s like naming babies, but better because I don’t have to convince my husband of anything, or try to figure out how the other kids are going to twist it to mock them.  Sometimes I switch up the names several times during the writing of a story, just for fun.  I look at nationality, age and popularity, meaning, all sorts of stuff, but often it just comes down getting to use one of the names I wanted for my children but got veto-ed.   I have a long list of those.  It’s not because my husband is picky, but because I like old lady names.  I’ll admit it.  I’m not ashamed.  And should I ever have another girl, she just might be Penelope, or Josephine, or Georgianna, if I can convince him that his opinion doesn’t actually matter.
Right now I’ve got a very likable character with the same name as one of my nieces.   I may end up changing it, but for now it’s a little “thank you” to her parents who helped me out with my research for the story.   I asked my brother and sister-in-law for some experiences from their childhoods (the aforementioned Paul was right, I was a goody-goody so I’ve got nothing but lameness to draw on), and they provided me with pure gold—long lists of their delinquent teenage activity.  I don’t know if I can even believe half the stuff, but it’s very entertaining.  Based on my niece’s gene pool, it’s kind of miraculous she isn’t building a pipe bomb in the basement right now, but she’s only eighteen months old.
Anyway, the moral of this story is don’t cross me people.  And if you buy me something really nice for Christmas you just might end up a main character.

On a less psychotic note, my agent, Mandy Hubbard, has some VIRTUOSITY stuff up on her blog!   She shows the query I sent her, then the pitch she sent out to publishers, and finally what’s being printed on the book jacket.


Parting thought:  See the “follow” button to the right?  When I originally set up the blog I took that off thinking now why would I want to advertise the fact that nobody actually reads this blog?  I have since had it explained that people “follow” blogs so they get email updates when I post (I know, I’m an idiot for not knowing this.)  Anyway, I just want you all to know that it freaks me right out, having it up there.  And if the number never climbs out of  the single digits, I’m going to be indiscriminately hating everyone I know.  That’s all.

Me: I’m not running a marathon this year.
Husband:  Thank goodness.
Me: Hold me to that, please.
Husband: Gladly.
One Whole Day Later
Brother: Do you want to run the St. George Marathon with me next October?  All the siblings are doing it.
Me: I don’t know.  My book is coming out that month.  Not sure if it’s a good idea.
Brother: You probably shouldn’t do it then.  You’d probably just stress yourself out trying to qualify for Boston, or re-injure your hamstring, or something.
Me: Screw it.  I’ll be there. 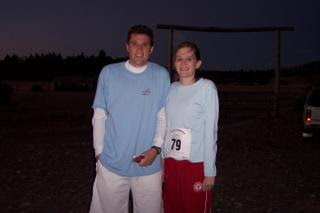 And if that wasn’t enough, then I came across this picture of the last race we ran together and got all nostalgic.  It was the Grizzly Half-Marathon in Choteau Montana, five years ago.  He placed THIRD OVERALL, and I placed first in my own very small category of women breastfeeding at both the start and finish line.
Now I just need somebody to peer pressure/reverse psychology me out of running a marathon next October.  Any volunteers?  Or just come and run it with us.  Trust me, it’ll be fun.  There might be tears, vomiting, chaffing, fainting, and/or bleeding, but it’ll be fun.

On the Writing Front
VIRTUOSITY Revisions: ACCEPTED!!!  I’ve been sweating bullets over my new ending, but my editor loved it (thank you, Anica!) and the manuscript has been sent to copyediting.  Whatever that is.  Or maybe I should say wherever that is.  Maybe there’s a whole copyediting land with unicorns and cupcakes and free massages.  Hmmm, if so, I hope I get sent to copyediting someday…  (I’m not sure if I actually need to explain that I do have some idea of what copyediting entails or not.  Guess I just did.)
So just when I thought I could stop checking my email four times a minute, Anica told me they were having an open casting call for the cover model, and that if she’s allowed to, she’ll send me a picture of the girl they choose!  Back to refreshing the inbox.  I really hope my Carmen doesn’t have a snaggletooth and a monobrow.
The WIP.  I have got to name this thing so I can stop calling it that.  I’m rewriting, because apparently that is what I do.  My writing process needs some serious tweaking, but I’m not sure how to fix it.  I guess I write books by writing 80,000 words, then realizing I’ve finally found out who my character really is, but that isn’t the same person she was at the beginning of the book, and her story needs to be different too.  So I rewrite the book.  Totally.  It’s not that I don’t outline.  I just have to get to know her really well, the same way you get to know a real person, and that takes me a long time.  Maybe for the next book I’ll do some intensive Daniel Day Lewis style become-my-character-for-a-week instead.  Seriously, that would be easier.  Let’s hope it’s not a book about a serial killer.
Ode to Watching TV with my Husband
I hate COPS.  The show, not actual police officers—I like them just fine.  I’m watching the show right now because I like to be in the same room as my husband in the evening after the kids are down.  Hard to say whether or not this counts as quality time together or not.
Anyway, I hate the show.  At first it’s hilarious (I mean, are people really that stupid?), but then you realize yes they are, and what you’re watching is happening all over America, that there are thousands and thousands of huffers/DUI-ers/wife beaters/tranny prostitutes getting arrested right now.  And that’s sad.  Then you realize there are way way more out there not getting arrested right now.  And that’s scary.
I prefer it when he watches Telemundo.  I don’t speak Spanish, but I get significantly more out of it than ESPN, which is the other go-to.
Clearly, I need to reclaim the remote.
Why I Don’t Reclaim the Remote
I’d much rather make fun of his shows than listen to him make fun of mine.