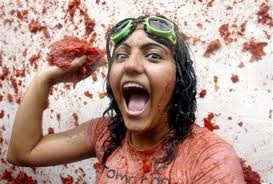 So I had my first official speaking engagement as an author.  This was the last thing I saw before I blacked out.

I spoke at a local middle school’s literacy night about what inspired me to read/write when I was younger.  Actually, that was just the suggested topic.  I also waxed poetic about such television masterpieces as “Wipeout” and “Hole in the Wall,” as well as my own childhood game show experience.  I know, you’re all wondering what on earth that has to do with literacy, but that’s between me and the fine students of Westridge Middle.
I was a little bit scared of being heckled, but I used to teach high school, so I’m familiar with the perils.  Sometimes you get the bear, sometimes the bear gets you.  MUCH scarier was the fact that my parents were in the audience.  They just happened to be visiting from Canada and asked if they could come along, so I said sure!  Of course!  I even insisted they wouldn’t make me nervous!  All lies.
I did really want them to come, though–I just didn’t want them to see me flop.  It was all very teenagery of me.  Does anyone else remember feeling like their social failures were only tolerable if their parents didn’t know about them?  Back then, I didn’t want them to feel sorry for me or think they’d produced loser offspring.  (For the record, I wasn’t a loser, and if any of my brothers are reading this, shut up in advance.)  Anyway, I think the literacy night kids had a good time and I certainly did, so I didn’t even have to have a teenage freak out on the way home.
One of the fun parts of speaking for me was getting to show a big blown-up cover of Virtuosity.  They all oooh-ed and aaaah-ed like good little captive audience members, which made me want to cart the mounted poster around all day.  I’m actually wearing it around my neck right now.  Shoot, that image is WAY funnier if you’ve actually seen the cover, which you have not.  You know those t-shirts that have the body of some curvy bikini-clad girl on them, so the person wearing the shirt looks like that’s their body?  It would be like that.  Except the Virtuosity girl is wearing a fabulous gown, not a skimpy bikini.  Never mind.  I’ll get to show you soon and everything will make perfect sense.  Oh, and I’m not really wearing my book cover right now.

Unless that isn’t the dorkiest thing in the world, in which case, I might be.

Blog, don’t hate me for my neglecting you over Christmas.  Just get over it.  Move on.  I’m singing that Chicago song right now, the one that starts “Everybody needs a little time away…”

This is what I was doing while I was not blogging.  Going to Gatorland with visiting relatives.  For reals. 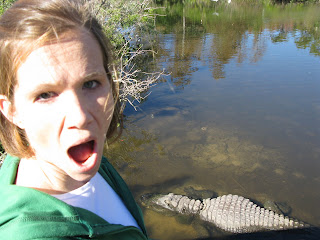 Like the tan?  The other day someone told me I looked like a vampire, but they started with “No offense, but …” so I didn’t really mind.  No, I really didn’t.  It takes a lot of sunscreen to stay this color. (In case you were wondering, the other option is lobster red.)
I haven’t just been wrestling gators for the last month, though.  I was also working on the first pass pages of Virtuosity.  It was fun to see it looking like the inside of a real novel, but scary to know it was my last chance to get things right.  Because my kids were out of school for Christmas break, I ended up doing more than a little bit of it at Chuck E. Cheese’s.  Also, for reals. 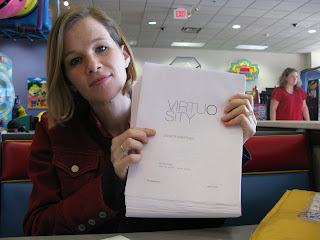 If it looks like this shot (and many of the shots on this blog) were taken by a five-year-old it’s because they were.  And in case you were wondering, the soundtrack at this fine venue for the entire month of December is Chuck E. himself singing Feliz Navidad and Dradle, Dradle, Dradle back to back, over and over again.
Okay, so I’ve got a list for y’all, but I need to preface it with this announcement:
I AM NOT A WORRIER
Really, I’m not, and I’m not just saying that to convince myself.  I’m much more likely to feel guilty about stuff I’ve already screwed up (hmm, retroactive worrying?)  than to flip out about the stuff I haven’t screwed up yet. With that said, I give you the following list.
Things That Might Be Killing Me
1.    Power lines going up right behind my house
2.    Antiperspirant
3.    Whatever the pesticide guy was hosing my house down with yesterday
4.    The dye in the red velvet fro-yo I’m addicted to
5.    The 6000 dental x-rays taken of my cranium last year alone
6.    Insomnia
7.    Ibuprofin.  A lot of Ibuprofin
8.    Millionaire Matchmaker, one brain-cell at a time
9.    Too much sun
10.  Not enough sun
11.  The smell of Chuck E. Cheese’s
12.  My water bottle (either the chemicals being leeched from the plastic or the high-fructose corn syrup I’ve been pouring in there every morning)
13.  Killer bees
14.  Aliens
Crazy, crazy world.   I’d like to point out that worrying about any of the above would cause raised cortisol levels, which are probably more harmful than any of those things in the first place.  Right?  I mean, worrying only helps if it inspires change, and I’m way too busy for behavior modification right now.  So screw you, Dr. Oz.  I’m chugging  this BPA leeching Evian bottle and then  I’m refilling it with straight corn syrup.  Again.  (Sidenote: any show with doctors wearing scrubs and lab coats that isn’t General Hospital or Grey’s Anatomy earns a huge eye roll from me.  Seriously, are you planning on performing an impromptu appendectomy on a lucky audience member?  Or do you think we’re too stupid to understand that you’re doctors unless you’re in your “doctor costume”?)

So here’s my goal for 2011 and the book launch: No worrying.  Just enjoying.  Virtuosity is coming out and there are more than a few things I could agonize over, but I’m not even going to start listing them.  If I freak out about every little thing, this year will be like a really long first-day-at-a-new-job and I’ll miss out on all the fun.

(Sidenote #2: I have a bunch of really horrific “first day” stories, which would make a ruling future blog entry.  Stories so terrible you’d swear I was lying, so embarassing I haven’t even told my husband the details and they’re close to a decade old.  I just threw up a little in my mouth thinking about one of them.)

Writing news: VIRTUOSITY sold to the UK/Commonwealth!!!  Being Canadian, and having lived in London for a year, there has always been a special place in my heart for the motherland.  As evidence, I taught my children the “real” words to My Country Tis of Thee (God Save the Queen) just to mess with my American husband, and I also have a wee bit of a crush on Prince Harry.  I know, I know, he’s kind of the nutso one, but I have a thing for crazies, and yes I know he’s 5 years younger than me.  So what.  Anyway, now I get to love England even more.