Meet the girls!  This is my favorite vacation picture. 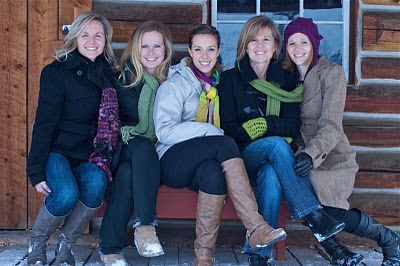 From left to right: my sister, my two sisters-in-law, my mom, and then me in the hat.  These are the women that remind me it’s NOT OKAY to go a week without showering, or to wear my electric orange University of Tenessee pajama pants all day long, or to cut my own hair.  Just because I live a whole country away, it’s still NOT OKAY.  I don’t know where I got my less-than-classy tendencies from, but without this bunch, I’d probably be digging through a dumpster right now looking for furniture or lunch or both.
So vacay was a success.  I bought jeggings, I got my fill of cold for the decade, I ate a lot of chocolate and remarked that it would be fun to go for run if there wasn’t several feet of snow on the ground, and I saw a bull moose close up.  Mostly, it was fun just to talk to the people that understand me best.  Favorite conversations: 1. Plastic surgery (Lift or tuck or both? Botox–yay or nay or forehead only so you don’t look like one of the Housewives of Beverly Hills?) 2. How much you’d pay to punch a Kardashian 3.  Whose husband is the most troll-like.  Just kidding, there was surprisingly little man-bashing to be had.  Maybe next time.
And now I’m battling post-vacation blues.  My four and half hour dentist appointment didn’t help any—for the first time in my life I actually cried in the chair.  Don’t judge me.  It was bad.  You would have cried too.  The good news is I only have one more appointment to go, and then I’m done until the next major catastrophe.  I should be back on solid foods in no time at all.
Writing news.
I’ve SEEN the cover photo of Virtuosity!  It exists.  It’s beautiful.  I’m dying show it to everyone and their dog, even strangers who don’t give a crap and their dogs too, but it’s still top secret so all I can do is be annoying and brag about having a secret.
It’s kind of bizarre that I even have something top secret to allude to.  I mean, it’s me.  Top secret refers to Christmas presents, or that mirror I broke when I was thirteen and then hid under the bed because I knew my mom was going to freak out about it (genius move, I know).   I know my book cover is not a matter of national security.  Probably nobody getting water-boarded if it gets leaked (at least I don’t think so, but really, who knows what they’re up to at Simon & Schuster?), and yet I can’t tell.  So…na-na na-na boo boo?  That doesn’t seem like top secret protocol.  Clearly, they should have given me better instructions.
Lastly, the WIP is making me really happy right now.  I’m in that place where I daydream about my characters like they’re real people.  I love the way the story is unfolding, I love the direction the characters are moving, and all that’s a relief because it would be a shame if I had to kill everybody off.  Deep down I kind of like unsettling endings, but not that unsettling.  Besides, I have a feeling my editor/agent/every reader in the world might object to that kind of thing, so I guess it’s good I don’t feel the need to actually kill them.  Anybody else like a good bad ending?  What’s the matter with me?  Feel free to answer either of those questions, either in the comments or just to yourself while you’re shaking your head with disgust.