I never re-read books. It’s not a policy or something I’m actually advocating, but at any given time I feel like there are at least thirty books I want to be/should be reading, so re-reading doesn’t even occur to me. This week, however, I’m throwing caution into the wind. 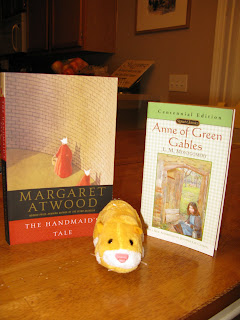 The showdown: Anne of Green Gables vs. Handmaid’s Tale.  It’s not really a showdown–I’m not comparing them. That would be stupid.  I am, however, alternating chapters just for pure shock value.  It’s like going back and forth between hot chocolate and a Slurpee.  That hurts my teeth just thinking about it.  I’m reading them both as research for the novel I’m working on.  (I know, if you’ve read both of these books you’re thinking “what the?” and honestly, so am I right now.)

It’s been about 20 years since I read Anne, and 10 since Handmaid, so it’s kind of a relief to still be loving them both. I’ll recant if that changes, but for now it’s nice being able to tell myself I have to be reading both of these books.  Makes me have warm fuzzy thoughts about being a writer.

See the Zhu Zhu Pet? After totally alienating the animal-loving population in my first post (probably not smart), I decided to show my soft and cuddly side. I got these for my kids and they rule. The kids love them, and they barely even know they aren’t alive. Best part: they don’t poop every five seconds like the real guinea pig we used to have but had to give away because the smell was driving me insane.  See?  I’m not a terrible person.  There’s room in my heart for a chirping, battery-operated  friend with an “off” switch.  Next week I’ll post pictures of the plants I’m intentionally killing right now.  They’re just so freaking needy…

And now for the totally random part of this post:

I saw this ad for Disney auditions in the newspaper today, and my knee jerk reaction was, “Yay!  Now I can be a Disney Princess!  This is the best part about living in Orlando!” 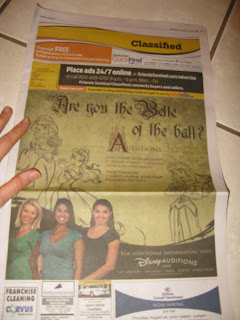 It took me a few seconds to remember:

A.  There are a whole bunch of Disney Princesses and I don’t look ANYTHING like ANY of them.  No self-esteem interventions please, I like myself just fine, but seriously, no resemblance.  I’m probably closest to looking like Mulan, and I’m not even Asian.  I just have similar shaped eyes and am much more likely to be able to disguise myself as a man than as Ariel.  If you know what I mean.

B.  I’m not looking for a job!  I feel like I’ve got way too much on my plate right now, and I’m already dropping the ball in more than a few area.  Today’s example:  I forgot that Wednesday was early day and wasn’t there to pick up my brand new little kindergartner from the bus drop off.  That’s right.  Worst mother ever.  One of the other mothers in our neighborhood walked him home for me, and I’m so embarrassed I want to curl up into a ball and read Anne of Green Gables without the electric cattle prod effect of Handmaid’s Tale.  Who forgets their five year old on his first week of school ever?  In my defense, it was MY first early day too and next Wednesday I’ll be extra special early.  The other mothers on my block are probably planning some kind of intervention for me right now.

I guess my take home lesson is it’s probably not wise to go auditioning for Disney Princess gigs yet. Also, now that my kids have schedules, I should really start using my planner.